This article below was written by Peter Delaney for the Henley Standard following an enjoyable illustrated presentation by Joy and Joe Haynes on the history of the Wargrave Theatre Workshop  to the Wargrave Local History Society in September 2018.

“The theatrical tradition in Wargrave goes back to at least the 18th century. In 1788 Lord Barrymore had built his theatre by the foot of Wargrave Hill – said to be the second largest theatre in the country at that time, but Barrymore was somewhat profligate, went bankrupt, and the theatre was demolished. Little is known about nineteenth century village 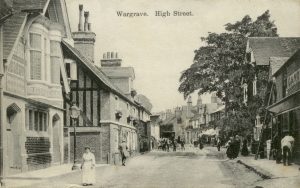 dramatic activity, but by the 1930s Mrs Rowlands, the chemist’s wife, was producing amateur shows, whilst during World War 2 British and American troops were entertained by a variety show, called “Garrison Theatre”, produced using local talent. At the end of the 1940s, Peggie and Anthony Hannen moved to live at Ouseleys. Peggie had trained at RADA, was a professional director and actor and a ’luminary of the theatre’. She became involved with village drama, producing plays for several groups, including the ‘Haughty Culturists Review’ for the Village Produce Association and regular performances for the Wargrave Society.

In 1974 Miriam Moore came with her family to live in Wargrave. She was ‘quite a character’, ‘full of ideas’, although some found her ‘impossible to work with’. A meeting in the November that year to establish the ‘Wargrave Theatre Workshop’ was attended by over 40 people, and a committee was formed. The initial production – as part of the first Wargrave Village Festival – was of ‘Oliver’ and was reported to have ‘saved that Festival from disaster’. The first of many musicals put on by Wargrave Theatre Workshop, it involved many children in the performance –something the group has continued to encourage. Later in the year the first Wargrave Theatre Workshop pantomime – ‘Babes in the Wood’ was staged. It has become a village tradition, with 43 having been put on to date. Several were specially written by Mike and Leo Wyatt – sometimes deviating from the traditional story to incorporate village characters, or topical political themes. Amongst other pantomimes were ‘The Emperor’s New Clothes’ (for which Sir Robert Phillis’ costume had to have new leaves provided each evening!), Alice in Wonderland, Robin Hood, Santa in Space and Peter Pan. In the latter, Peter Pan actually flew across the set –something difficult on the small Woodclyffe Hall stage – particularly stopping the actor from colliding with the wall on the far side!

Musicals also continued, being performed in a marquee on Mill Green. Miriam’s production of Oklahoma in used a live horse, and Peter Hearn of Hennerton provided chickens and a calf. At this time several performers were villagers with professional experience of the stage – two former Tiller Girls and a singer from television’s Back and White Minstrel Show, for example. The fabulous hats made by Sally Hinton for ‘My Fair Lady’ in 1983 are still to be found in the Workshop’s wardrobe department. The musical director for the early musicals was Hedley Roberts, with Richard Gobs taking over for the later ones. 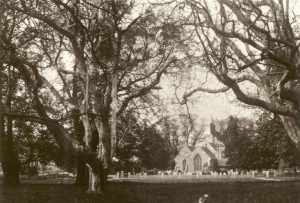 Theatre Workshop’s strength is in drama. Peggie Hannen – who had a meticulous eye for detail, produced ‘Sailor Beware’ and ‘Hay Fever’, whilst Joe Haynes had directed ‘Spring and Port Wine’,, whilst Peggie directed ‘Whose Life is it Anyway?’, in which Joe played a paralysed invalid who had not to move during the 2¼ hours performance – not easy when the ‘nurses’ tried to tickle him during the play! Other classical dramas have included ‘Stepping Out’, ‘She Stoops to Conquer’ and Moliere’s ‘Tartuffe’. The Workshop also entered several local Drama Festivals when one-act plays were performed – with great success – in competition with other groups.

One of the difficulties in using the Woodclyffe Hall stage is that it has a depth of only 9 feet. This area could be extended by adding blocks, made by Stan Callender, Bill Clarke and Dick Goodall, along the front. They were incredibly heavy, and could not be left in place, as the Hall at that time was also used by a badminton club. However, Ann Roberts conceived a project to make a pull=out extension. Part paid for with a lottery grant, this can be set in place in about 20 minutes

Meanwhile, Workshop productions for the Village Festival became open air performances of Shakespeare on Mill Green. The first, in 1987, was A Midsummer Night’s Dream – notable for a severe thunderstorm one evening when at the interval the cast had to do to a nearby house and put the costumes through a tumble drier. Two days later, a large tree game down on the area where the children and other actors had been standing. Subsequent performances have been on a different part of Mill Green, with better tiered seating, and now with a cover over the audience.

For many years, tickets for Workshop productions were available at Pat Gemsa’s store in the High Street – likened to the hardware shop in the Two Ronnies ‘Four Candles’ sketch. Later Mallows, and then Simmonds and Lawrence, both then in the High Street, were the booking agency, although now-a-days tickets are available via an online site.

Joy and Joe then also illustrated many of the ‘back-stage’ activities, from their rehearsal room in the Woodclyffe Hostel, the new dressing room area at the Woodclyffe hall, the work of making costumes, led by Maureen Fennemore and Judi Rowlands, the make-up artists, set design and construction, lighting and sound effects, and sourcing suitable props.

The audience enjoyed identifying many of the Workshop members in the pictures – some who began as juniors now taking leading roles in adult productions, whilst others have gone on to work professionally in the theatre. Joy and Joe had also set up a display of past posters and programmes for members to view.”